BMC was founded in 1985 as a company for assembly of electronic cards.
To diversify the production, after a few years the activity was implemented with wiring of electrical panels and on-board machine systems.
In 2004, after the development and strengthening of business, we moved to Mordano, current headquarters of about mq.1600, with new investment in: specialized departments for wiring, automatic vertical storage system, new lines for the realization of electric panels in series giving up the electronic production. 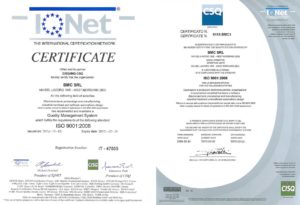 In 2010, the generational mentoring and the aim of providing a more complete service to the customer enabled the creation of a new reality, born from the partnership between BMC and the study of engineering ProjectCad srl.

The constant engagement of these years in researching and developing new and more competitive technologies, led in 2015 to the purchase of new machinery within the wire cut and automatic seaming. It was also carried out an intervention aimed at energy savings with LED lighting system. Innovation, effort and passion are the strength that differentiate us.